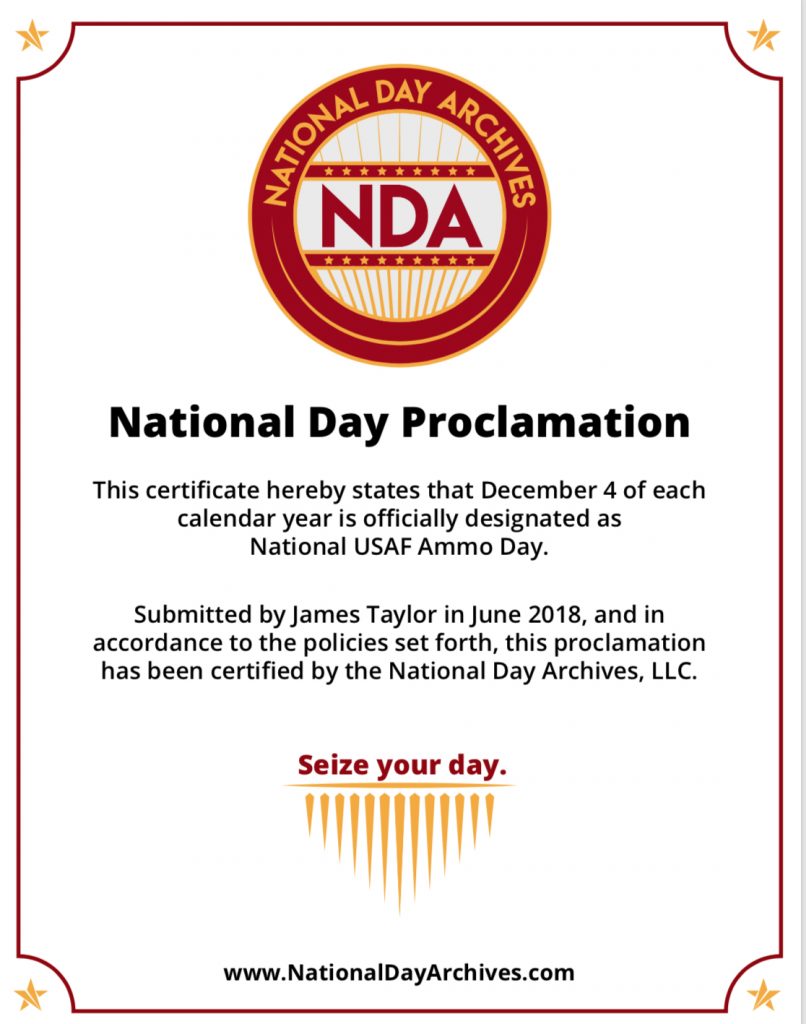 Thanks to Jimmy Taylor for all the hard work and to the guys in the AVA who initiated National AMMO Day. The proclamation will serve as a perpetual reminder to all AMMO Troops – – past, present and future – – that the AMMO Flame is burning brightly and will never be extinguished.

The AMMO Veterans Association and the AMMO Chiefs Association are pleased to announce the kickoff of “National USAF AMMO Day” (or more simply known as “AMMO Day”) to be held annually on the 4th of December beginning in 2018, contingent on whether the day can be approved and finalized to be included in the National Registry.

Therefore it is further proclaimed that United States Air Force AMMO Troops past and present who held, or are now serving in, Air Force Specialty Codes 461 and 2W0 (Munitions Systems Specialists) are equally qualified candidates to have their own Specialty added to this impressive listing of Foreign and Domestic Ordnance & Explosive orientated Military and Civilian occupations / organizations all holding this day in such high reverence.

The primary purpose of this day is to bring together all AMMO Troops who have served for any length of time and those who have either Retired or are now on Active Duty, no matter their location to participate in a day of camaraderie and celebration. AMMO Call’s, softball games, horseshoes, social gatherings / visiting with new / old  AMMO troops and their families, enjoying some cold beer and throwing some meat on the grill are but a few of the ways envisioned to do this. Or it can be something as “low key” as inviting a unmarried / unaccompanied AMMO troop to ones home for a quiet dinner and some conversation with family members.  We should all remember this day comes each year between two of our major holidays and is a time that can be especially difficult for younger guys and gals to be away from their own families. This is especially true in overseas locations and in remote areas at any one of the many AOR’s.

It is the AVA’s and ACA’s profound hope AMMO Day becomes a part of our lasting heritage and all AMMO Troops around the globe grow to appreciate and actively participate in its activities. After all – – they “Own It” as its two architects envisioned.