Those who do not remember the past are condemned to repeat it. -George Santayana

History is an ongoing process.  We have begun to record as best as we can remember some of the things that have happened in the Ammo Community.  But it does not stop with what we have here. Please submit your stories and pictures for inclusion here.  If you do not have the capability to scan a picture, send it to me and I will return it to you within 14 days of receipt.  If you have an email address I will also send you a copy of your picture in JPG format. 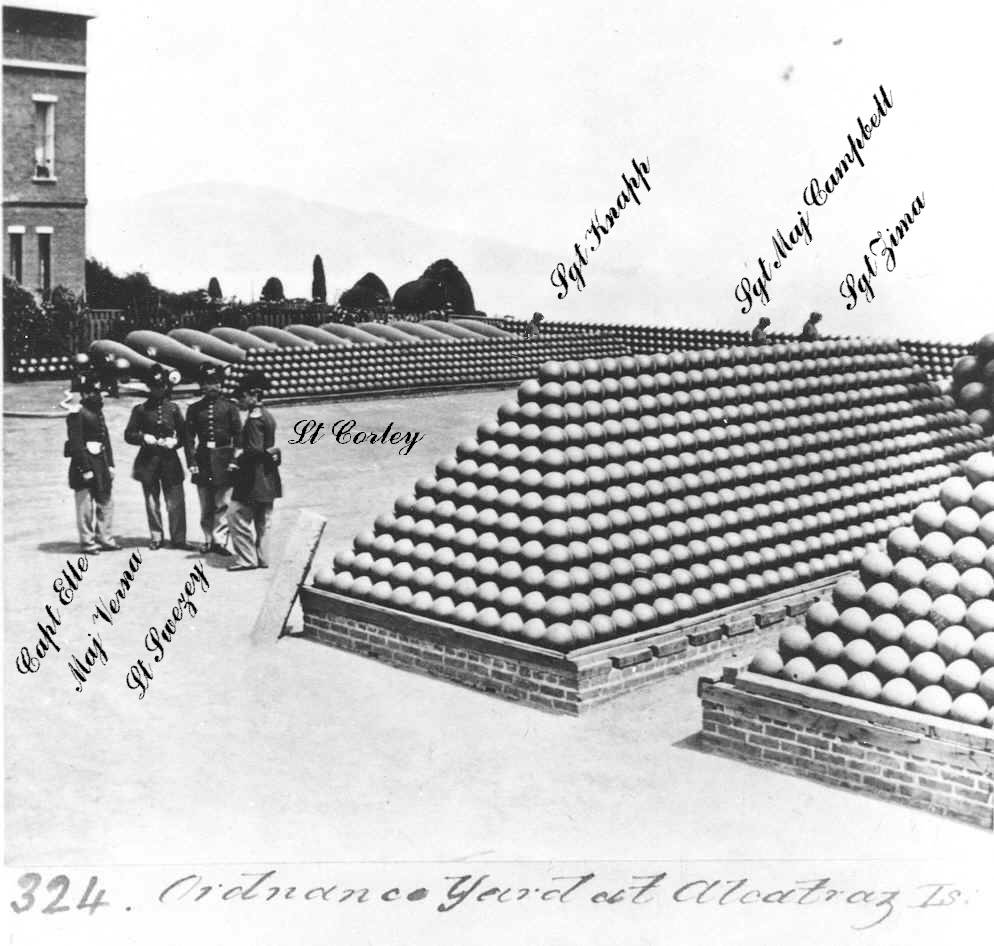 Did you know the first ammo troops over in China, about 800 B.C. were looking for an elixir to extend life when they came across the formula to make black powder? A couple of ammo troops masquerading as monks, Roger Bacon and a German guy named Berthold Schwartz were the next ones to advance ammo on this planet. As you may recall Bacon is credited with making gunpowder. It was Schwartz though who put it to practical use to propel things through the air. Then as now the guys in the dump were held with great suspicion and it took hundreds more years till one of our more famous ammo bretheren developed dynamite. Alfred Noble, you may remember him. Now us ammo troops have a much coveted prize named after this famous ammo troop. It took hundreds of years though to develop the level of destruction that made ammo an indispensable force in any modern military. So stay tuned for more ammo in general and more specifics about how ammo developed in the Air Force. 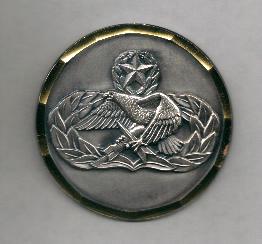 Here are some recollections from Joe Wata. The consensus of opinion is that Joe is the Dean of Air Force Ammo Chiefs. His story goes back to the very start of the Air Force munitions career field. Today we are 2WOs; before that 461s, 465s, 316s; and before that…well here is what Joe has to tell us:

MOS 505V was given to graduates of Primary Armament School. Of the 545 hrs of the course, 112 were allocated to Bombs, Rockets and Associated Equipment.48 hours covered Ammunition Supply Point, Bomb Handling Equip and Destruction of Ammunition. 59 hrs for Shop fundamentals and Principles of Explosives. The remainder was allocated to Hand & shoulder Weapons, Automatic Weapons, Gunsight, Guncameras, Etc. When you graduated, you could be assigned to a number of MOSs dealing with munitions or weapons.or even aircraft armament, which I believe was covered under the MOS 911.

MOS 901 Ammunition Handler obtained this MOS after attending school at the 86th AD, East Kelly AFB, TX and the 505V was removed.

In April 1950, Alaskan Air Cmd started converting everyone from the old MOS to the AFSC, i.e., MOS 901 to AFSC 46130. The orders stated that the MOS would be retained as the primary specialty until full implementation of the Career Program Over the years, took APTs and progressed from 3 level to 7 level in the 461 career field.

During Jan 1961, the change from 46170 to 46270 began. All 461s that were assigned to SAC Aviation Depot Squadrons (the bomb dump also came under this unit) except for one or two that were assigned to the supply section were converted to the 462 career field. Note.when this occurred, the APT for people in the 461 field converting to 462 was waived by Hq, USAF and SAC.

NOTE: When I was initially assigned to the 3rd Ammo, our officers were US Army Ordnance Corp. They were replaced in July 49 by AF Officers. 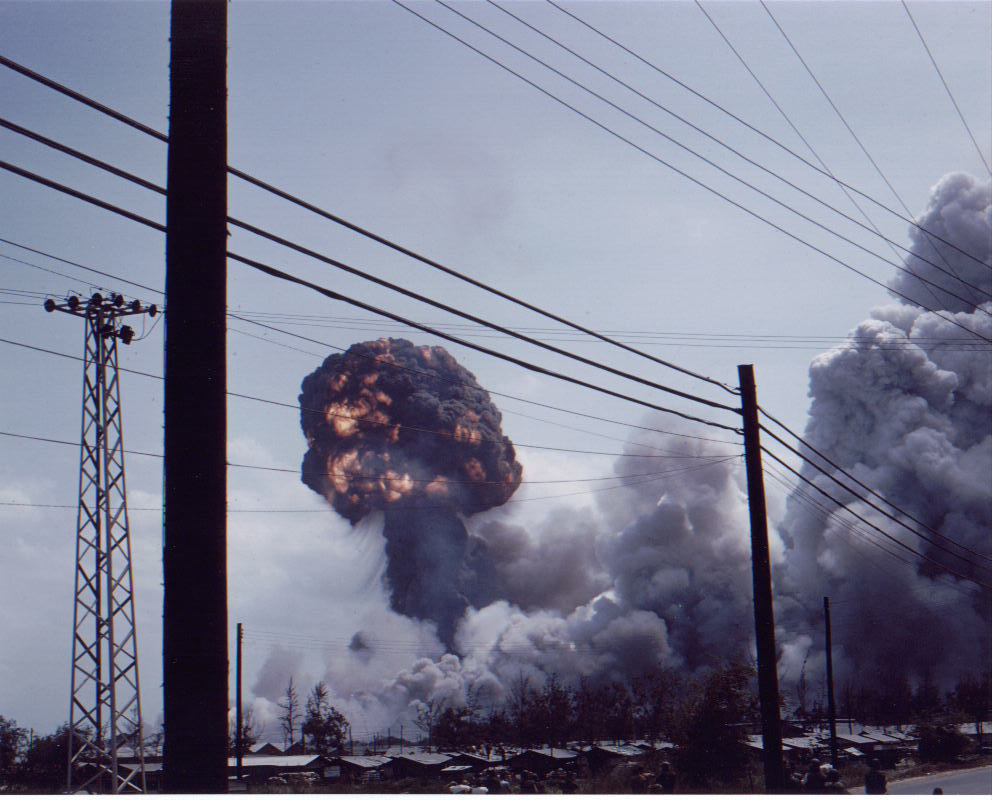 BOMB STORAGE  AT FREEDOM HILL, DANANG, APRIL 27,1969. EXPLOSIONS LASTED IN EXCESS OF 17 HOURS, INCLUDING MORE THAN 282 REVETMENTS WITH EXCESS OF 500,000 LBS. EXPLOSIVE WEIGHT EACH WITH MANY MUNITIONS STANDING OUTSIDE THE REVETMENTS. I WAS THERE AND TOOK A FEW PHOTOS OF WHICH THIS IS ONE. 22 MARINE AMMO MEN DIED THAT DAY. ALL THE AIR FORCE AMMO TROOPS WERE ABLE TO GET OUT. MOST BUILDINGS ON BASE WERE EITHER DAMAGED OR DESTROYED. WHAT A DAY. IYAAYAS.  DON MAYO

We learned a little more of our history thanks in part to Red Hess: 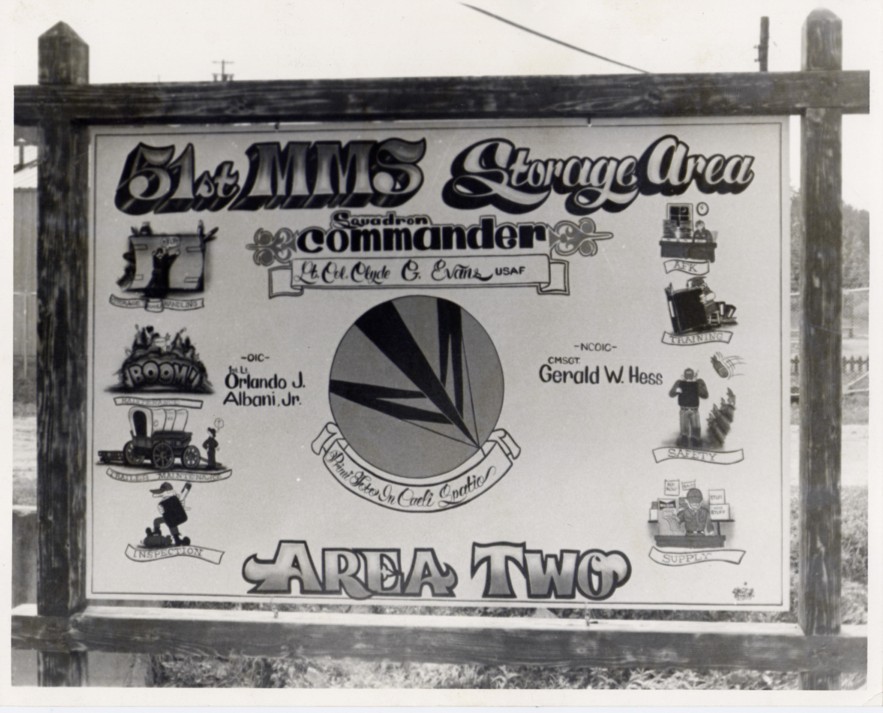 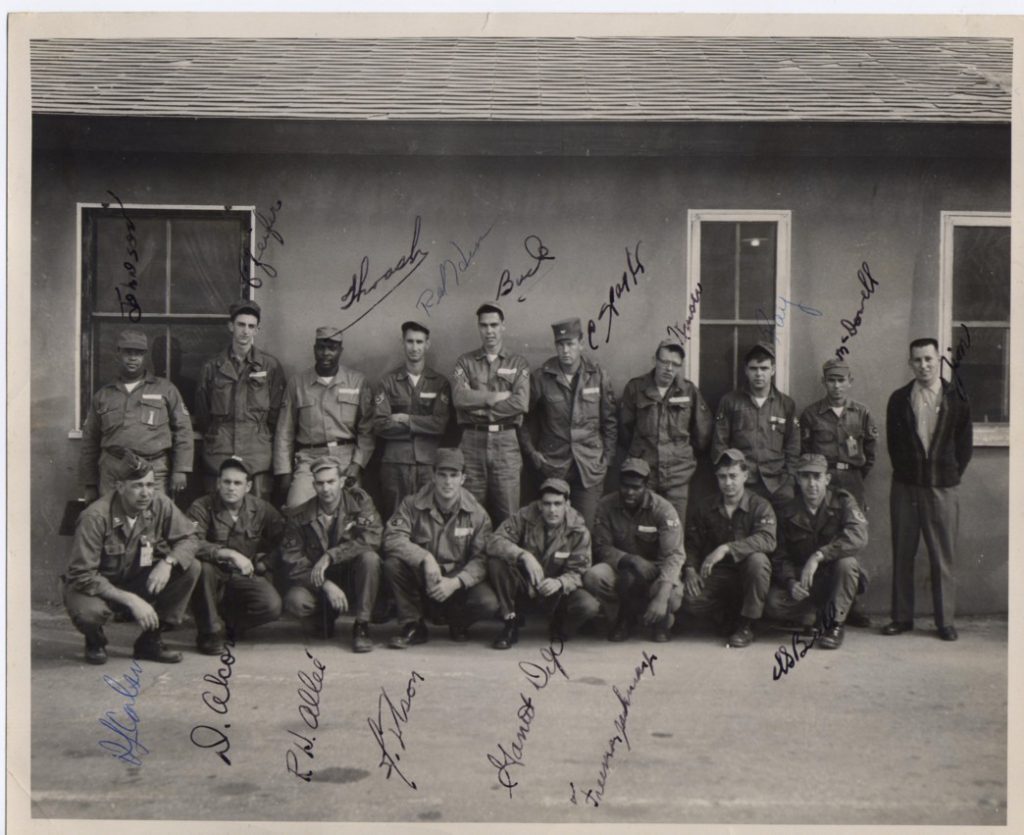 I enlisted in the Air Force in Jan 1961 and was given the AFSC of 46130 when I graduated from Tech School at Lowery in July, ’61….I’m still in AMMO at Wright Pat….Love it IYAAYAS….

I agree with you, the oldest living Chief should be President Pro Tem of the Association. We need to find that individual. The onliest one I know who might qualify with a DOR of pre-61, is Chief Wata.

Chief
I agree, and think you are on to something here. His BIO does match my research. Although I do not think he was the first AMMO chief (of witch I think they are two) he may well be the first ALL AMMO Chief.
Hope this produces some answers
Tolly (Tolly Lawherne)
Simply AMMO

Guys:
Seems to me there was a Chief Smith at the AMMO Area at Cannon AFB when I got there in January 1964. Chief Smith had part of one of his fingers missing. The OIC was a CWO4 Varner. 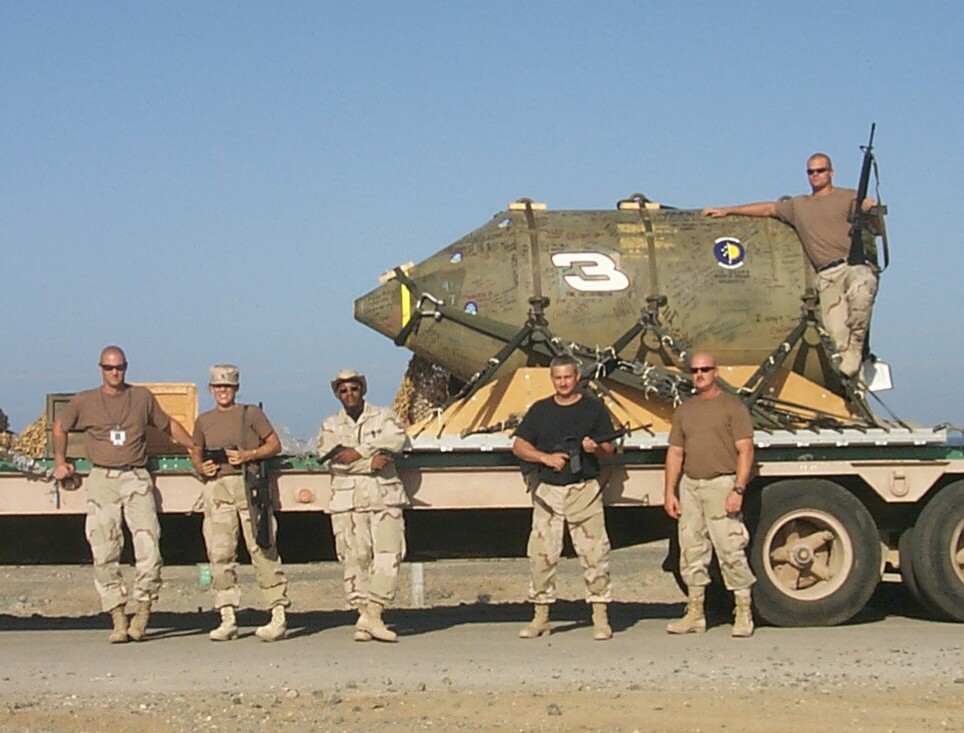 Supergrades (E-8 and E-9) did not come into existence until about 1958. Consequently, the first Ammo Chief could not have existed as a chief much earlier than that. I found a web site last night with some ammo troops from the Chize Ammo Depot we had in Chize, France. These guys date back to about 1957. I have contacted the four that were listed. Hope they can shed some more light on Ammo History. I will add another page to our web site to celebrate our history. Another link you may find interesting: http://www.militaryconnections.com/mc_index.asp?lg=1
Rich (Rich McVey)

I’ll recheck my personnel records but I believe that I was a 461×0 when I graduated from tech school.

Just thought I’d add my 2 cents worth. Nice hearing from you guys again.

Rich – your right. John – your right. I was a 461derfull in 1960 and I worked for a CWO Cook. There never was a “split” in the AFSC in 1968. There were at times opportunities for 461’s to go into nukes (463), missiles, FK, and even loading, but the 461 core AFSC never split. Often, 461’s were used (abused) by putting them on load crews or the other “related” fields when those related fields cried a lot and said they needed help. You had a primary AFSC 461 and a duty AFSC 462 or what ever. If you liked it, you could apply to officially constrain. 461’s were also given special experience identifiers – How many of you remember “Technical Escort”? These were 461’s who escorted chemical weapons whilst enroute by surface or air shipment. Think back and some may remember that at one time, Ogden was the center of the ammo universe and had a depot system called the Airmunitions Wing with satellite major depots in PACAF (Kadena) USAFE (Morbach) UK (Welford) North Africa and minor depots all over the world. We also had “Tactical Dept Squadrons” with only one left to my knowledge. At one time we had so many bomb dumps in the UK that we called it Americas’ largest aircraft carrier!
MK-1 (Mark Madamba) 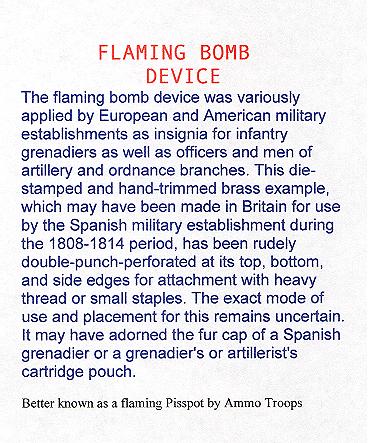 Click Here For more info on the Shell & Flame

Chiefs
Although I’m not near as old as most of you, I did hold the escort SEI until 1987 as MK-1 mentioned. As a History major I put this together to jar your memories. I tried to put exact dates to changes as much as possible but some of the phase outs occurred over months not exact dates such as the 316 phase out. As for the term 461 it was created officially on 29 Aug 1950. Have a look and see if it matches what you remember.

As far as who was the first AMMO Chief I have not been able to ferret this out yet but believe it was actually two at the same time not one and believe both were actually loaders or EOD before AMMO.
Tolly
Simply AMMO
AMMO CHRONICLES

1940S AMMUNITION SPECIALIST. ARMY MOS 55B
PEOPLE WHO DID NOT PASS THE ARMY AMMUNITION COURSE WERE GIVEN A DESIGNATION OF 55A, AMMUNITION APPRENTICE

1947 SEPTEMBER 17TH. THE NEW AIR FORCE DROPPED THE B SUFFIX, AND MADE THE ARMY AMMUNITION MOS INTO A FIVE DIGIT A.F. CODE LIKE WE HAVE TODAY. THE NEW A.F. DESIGNATION WAS 50501, ARMAMENT TECHNICIAN

THE NEW 50501 AIRMAN WAS QUALIFIED IN THE FOLLOWING SPECIALITIES

Subject: RE: Ammo Roots
Gary,
Rick Bussell and Mike Roylance gave me some historical documents a number of years ago and here’s what I’ve gleaned from them:
1943: According to a Westover Army Air Base, Mass Ordnance Technical School report, dated 7 Apr 1943 (source: historical archives at Maxwell or Langley AFB), ammunition handlers and aircraft armorers are the same MOS.
1949: From the Armament Systems Career Field document dated June 1949 (source: historical archives at Maxwell or Langley AFB): There are 20 Military Occupational Specialties listed including both officer and enlisted.  The chart shows consolidation of the 15 enlisted specialties into 11 Air Force Specialties. MOS-AFS listing shows Airplane Armour as MOS 911 with a proposed AFSC of 32060; Armament Systems Helper (32000 was proposed supt AFSC).
1958: From History Munitions, Nuclear Weapons, Munitions Operations (source: unknown but believed to be from the 3460th TCHTG) AFSC is 46280
1960: AFSC changes to 462X0 but name stays the same
1968: AFSC splits and 461X0 is created as Munitions Maintenance Systems
1980: Merger of 316X1L into 461X0
1986: Creation of AFSC 465X0 incorporating the Supply AFSC 645X0A
1992: AFSC 465X0 and 461X0 merge (memory)
1992: AFSC changed to 2W0X1 (memory)
As for who took care of Ammo? Then as now, Ammo did (source: my own %$#*! experience).
John Hough,

I’m trying to find out when the 461X0 career field was
established and who(m) took care of AMMO before 461s.
Gary (Gary Parker)