Here is a link to the SE Ammo Bowl Pictures, enjoy.

This email is being directed to you as someone who previously indicated that you’re planning to attend this year’s reunion!

Your San Antonio Reunion Planning Team has developed an exciting and fun-filled reunion schedule for your enjoyment.  The activities our team has planned are intended to ensure everyone would find something of interest to participate in during your short, but festive stay in the Alamo City.

I have attached two documents (in PDF format).  The first is our Schedule of Events that also contains a description of the activities you and your significant other can sign-up for and the second is your reunion sign-up sheet.  Please note that some activities have a minimum or a maximum number of participants that is normally dictated by the transportation requirement.

For those activities with a maximum number of participants we will do everything in our power to accommodate all that sign up for the event. For those with a minimum number, if we don’t get enough people to sign-up for an event we will notify you of that condition and refund all fees paid for that event after the final sign-up cut-off date.

BOTTOM LINE: Return your sign-up sheets early to ensure you have reserved a spot in the activities that you want to attend.

Here’s what to do:
1.      Review the schedule of events, pick those events you want to
participate in and sign-up for them on a PRINTED COPY OF THE SIGN-UP SHEET.
2.      Fill out the top portion of the sign-up sheet (name, address, etc.).  Be sure to indicate the banquet entree and number selection for everyone attending.
3.      Calculate the amount owed for the individual events you selected as well as a total amount.
4.      Write a check made out to “Ammo Chiefs Association” for the total amount due, place your check and sign-up sheet in an envelope and mail it to me at the address shown on the sign-up sheet.
5.      Click on the link at the bottom of the sign-up sheet, it will open a
web page where you can make your hotel reservation (the link pre-fills in the group code to ensure you get the discounted room rate).

Information about the Holiday Inn Riverwalk San Antonio and what is available in the hotel and each guest room can be found on their website (view this information after you’ve made your room reservation using the link provided on the sign-up sheet).  Here’s some additional information specific to our ACA Reunion agreement with the hotel:
1.      Discounted room rate is $134 per room per night (+ 16.25% taxes).  This room rate is guaranteed for a period of time extending 3 days before until three days after our reunion dates (23 Oct to 2 Nov 2016).  We initially have 50 rooms blocked under this group code.  If we need more, I’m fairly sure the hotel will accommodate us.
2.      Parking fees in the hotel’s garage are normally $25/night, for our reunion this was discounted to $15/night.
3.      The hotel has a great restaurant (Windows on the River) on premise that offers our group a discounted full American breakfast for $12/person daily.
4.      We will have full use of a ballroom (The Fiesta Ballroom) located on the second floor of the hotel as our hospitality suite between the hours of 6:30 AM till 11:30 PM daily during our reunion dates.  This room will be setup with tables and chairs, a refrigerator and a wet bar/kitchenette.  We will stock it with various beverages (beer, wine, alcohol, sodas, bottled water, etc.) and snacks. One of our volunteers will normally be there to assist as needed.
5.      Other discounts applied to our reunion activities include: waived bartender fees for the reception and banquet, waived room fees for all ACA Reunion activities held at the hotel, discounted menu prices on the banquet dinners, and a complimentary hospitality room.

I will send out other pertinent information helpful in planning your travel (car rental agencies, transportation to/from the airport and hotel, etc.) by email, individually, after I receive your sign-up sheets.
If you have any questions at all, please feel free to email them to me.

On behalf of the SATX Reunion Planning Team consisting of Fred Schoettler, Fred Lee, Steve West, James Biggerstaff, John Rivard and myself, we hope that all of you can attend and we look forward to seeing you in the Alamo City this October!

Mike had his creative juices flowing and created a fantastic video that I think could entice folks to attend this year’s reunion if they haven’t already fully committed themselves. Here’s the link to the video that Mike posted on U-Tube. 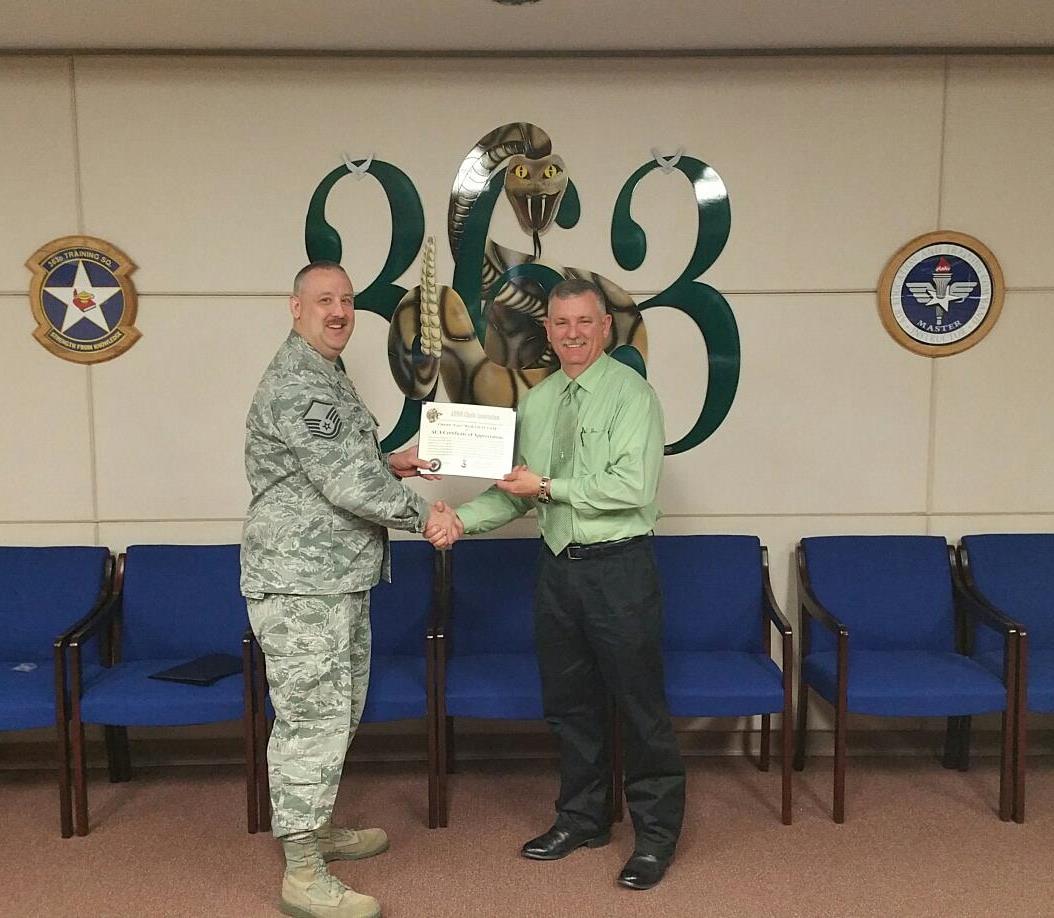 On behalf of the ACA’s Board of Directors as well as our entire Membership, please accept the accompanying Certificate of Appreciation and AMMO Support coin as a small measure of our gratitude for all you have done for our newest AMMO Troops. Your efforts contributed significantly towards ensuring these folks were adequately trained for their Munitions Support duties where and when called for, world-wide.

AMMO Troops have always been known for their ability to produce and deliver the correctly configured ordnance in the quantities required, on time, every time, in support of whatever the combat aircraft sortie rates happen to be during wartime under the most arduous conditions imaginable. They have performed these toughest jobs in the USAF’s maintenance world willingly and consistently without fail. No Fragmentary (FRAG) order has ever been considered too difficult – – these guys and gals get the job done.

Those of us who rose through the ranks doing this work throughout our careers take great pride in our heritage. We make no apologies for considering AMMO troops to be a “cut above” the average USAF war fighter. Our achievements speak for themselves through years of hands on experience in Korea, Vietnam, and nearly continuous combat operations throughout the Middle East and around the world before and since 9/11. AMMO Troops continue today doing what needs to be done and they will always be there to ensure our combat aircraft have the bombs, bullets and PGM’s to do the mission.

We hope you won’t forget your association with AMMO and we wish you all the best as you continue to serve the USAF and this great country of ours. Thank you again Gary for all you have done at the AMMO Schoolhouse. Stay well, be safe and please keep in touch.

The AMMO Chiefs Association Mid-Atlantic Chapter (ACAMC) submits the following 2015 Annual Report to the ACA
for review and filing in historical records:

Our Chapter had another busy year in 2015. We held four meetings during the year followed by social events. Additionally, some of our members participated in two fundraising events at the Richmond International Raceway (RIR) in April and September. We teamed with the Joint Base Langley-Eustis, VA Ammo Morale Team (AMT) at RIR and donated a substantial portion of the proceeds to them to assist with AMT programs. To maximize participation at meetings, we varied our meeting locations to minimize travel for our regional members. This year we held our March meeting at the HQ ACC Munitions Directorate and our June gathering at the 1FW Munitions Flight, Joint Base Langley-Eustis. Our September meeting took place at Captain Billy’s Seafood Restaurant in Newburg, MD, and we finished out the year at Bill McCullough’s house in Fredericksburg, VA for our December meeting. At our June meeting, we did not have a quorum. During the September meeting, only one officer was present. Both meetings were subsequently validated via e-mail communications.

Our main efforts continued to focus on supporting personnel initiatives such as the Ammo Troops-in- Need program during the Christmas holiday season, recognition of Quarterly/Annual Award winners, recognizing Sharp Ammo Troops, taking care of our Ammo family in our area of responsibility, and Holiday Care Packages for the Ammo troops in austere locations. This year we received donations from the ACA, and individual ACAMC members, for the Holiday Care Package program for our Ammo troops stationed in four remote areas of Southwest Asia. Jackie Miller put together packages comprised of over $1,180.00 (including postage) worth of goodies for the Ammo troops. We received “Thank You” e-mails and cards from a couple of the recipients and they were extremely pleased with the packages. We appreciate all of the support we received for this ACAMC program! A special thanks again goes out to Jackie Miller for purchasing and shipping all of the items, as well as receiving a substantial donation of dental hygiene items from his dentist. The Chapter voted to send out care packages in June since the Ammo troops need some morale boosters during that deployment cycle.

2015 was not the healthiest year for our members and families. Frank Waterman is recovering from back surgery and his wife, Pokson, suffered a shoulder injury then got pneumonia. Bill McCullough and Yvonne Watts both had hip issues that took them out of commission for awhile. John Matthews’ daughter, Vicky, had a stroke and John and Myong went to assist her in Florida for a short time. Sharon Jacobsen was sick but seems to be doing much better now.

Nationally, we lost a few Ammo troops this year. The Chapter sent cards and donations to the families of these warriors who headed to the “great bomb dump in the sky.” Their losses are heartfelt throughout the Ammo community.

During the year, our membership increased by 1 to 22 voting members and we still have 4 Associate members. CMSgt David Jamison from Seymour-Johnson AFB, CMSgt Christopher Arnold, stationed at the Pentagon, and John Nye, Air National Guard, Joint Base Langley-Eustis, are our newest members. Stuart “Nik” Nikolas retired and moved to Georgia. Mike Robertson moved to Utah to pursue other work to aid the Ammo effort. Because of Mike’s departure, we needed a new chair for the Awards Committee. Dave Nixon graciously volunteered to step up to the plate! Bobby George PCS’d to Korea but still remains on our books since there is no chapter in his area.

Our fundraising consisted of Chapter dues, coin, hat, and shirt sales, donations from chapter members, the RIR, and a raffle of a White House Christmas ornament ($105.00 raised solely for the Ammo Troops-in-Need program). During the holiday season, we disbursed $755.00 for our Ammo Troops-in-Need program (one Joint Base Langley-Eustis and one Seymour-Johnson AFB, NC recipient).
During the December meeting, we held elections for the offices of Chapter President and Vice President. Jackie Miller was elected President and Yvonne Watts won the spot of Vice President. Our hats off to Eddie Fuquay and “Nik” Nikolas for their outstanding leadership during their tenure as President and Vice President, respectively.

Also at the December meeting, AIC Benjamin D. Latimer from Pope Army Airfield was selected as the “Sharp Ammo Troop” for 2015. A check, certificate, and coin were awarded to him.

As one of Eddie’s and Nik’s last duties, the Chapter Constitution and Bylaws was approved and signed.

Our events calendar for 2016 fills up our plate for the year. We will eagerly attack the challenges that we will face and shall continue to meet, socialize, and accomplish our Chapter goals. The ACAMC stands ready to take care of the troops and keep the Ammo flame burning!

In addition to his parents, Paul was predeceased by a brother, James Klein.

He is survived by his wife of 50 years, Mitsuko; a son, Toshio Klein and his wife Lisa of Spartanburg, SC; 2 daughters: Mary Klein-Tijero and her husband David of Monterey Park, California , Joy Klein of Myrtle Beach and his granddaughter, Mina Klein.

Paul was a devoted husband, father, grandfather and friend. He retired from the USAF as a Chief Master Sergeant, actively serving in Vietnam and retired from the Georgetown County School System where he taught small engine repair and computer science. He loved to go fishing and hunting with family and friends. Paul will be dearly missed by all.